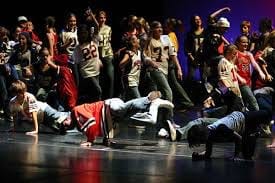 Since it’s the Birthday Month of the culture known as Hip Hop (November 12th 1974), It feels appropriate to talk about the history of this style of dance and its importance to the world.

It all began with a party on August 11, 1973, hosted by a man named DJ Kool Herc. He was born in Jamaica, and moved to the US when he was 13. DJ Kool is responsible for creating the “break” that led to the creation of emceeing (rap) and breaking (dance), as the DJ was the most important element of the party. He would find the drum break of the record, the part where only the drums were playing, and continuously loop it. This loop allowed dancers to be able to exchange with each other in what is known as a cypher (dance circle). Through these dance circles, movements were created and shared with kids from all parts of NY.

There’s so much more I could say about Hip-Hop’s history, but I want to focus on why and how hip hop dance began to develop and evolve into what it is today.

The principles of Hip-Hop call people to take what is around them and adapt it (or remix) to fit their craft or style. The DJ didn’t have a full band to travel with him to parties, so he took records and created instrumentals by looping the drum break. The emcee would then use that opportunity to speak, wether it was bragging about his DJ or hyping up the crowd.

In dance, many of the kids in this era of New York were African American, or of Latin descent. African American culture has a rich music history that developed such forms as rock and jazz in turn creating dance styles like the Lindy Hop and Swing.  On the latin side kids were commonly exposed to dances like Salsa and Capoeira. In the spirit of hip hop, they found a way to take the steps that were given to them through their cultures and fuse it with the movement that was happening at the parties to create what is now known as Breaking.

Breaking didn’t evolve until the cypher was introduced. As stated earlier, it allowed dancers to exchange what they were creating. In doing so, they were creating these original movements that eventually created the foundation of the dance that was shared among the community. At this point it began to spread through out the country and world, through media coverage and people traveling around the globe.

Hip hop set the precedence of creating something from a place of lack, and showing how taking what you have around you and using it to express yourself can create something that will change the world.

Mr. IKA has several other articles that go more in depth on the history of Hip-Hop.  If you’d like to learn more, catch him after class or around the studio.  He’d love to share.